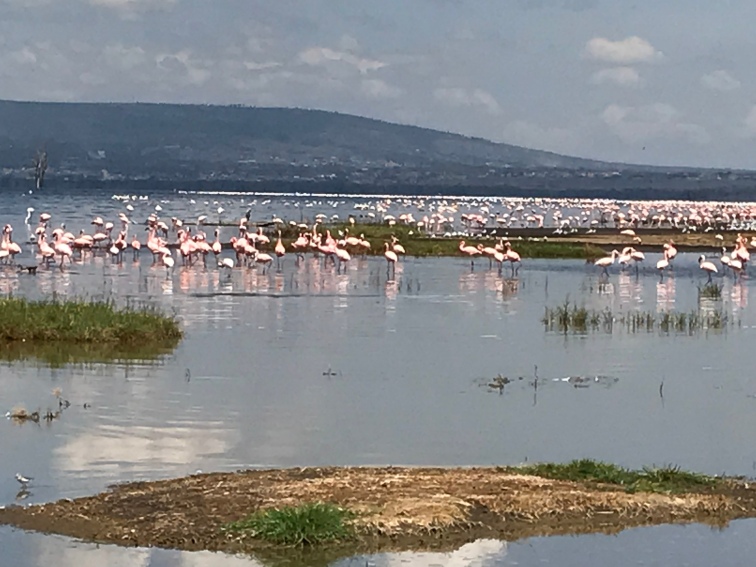 My second stop in Kenya safari was at Lake Nakuru. I said good-bye to River Ewaso Ng’iro, the birds and trees (I believe they sense our emotions) and the friendly staff at Larsen’s Camp in Samburu. On a chilly morning, after a quick breakfast, I started the 7 hour drive to Lake Nakuru.

As I drove out of the forest, I said some more good-byes to the giraffes, elephants, ostrich and zebras, that crossed in 10s along the way. I was trying to capture every passing scene, which I might never see again, in my mind’s eye.

The road to Lake Nukuru was quite picturesque. I saw huge cactus trees (I don’t remember the name). These were quite different from the tall thin cactus that I had once seen in Arizona on my way to Grand Canyon.

Barring few patches, the road was by and large smooth. I crossed equator at altitude of 2270 meters. When I stopped to take pictures, a young local boy offered to show an experiment. He demostrated the Coriolis effect in a basin of water. He put a match stick in the water. He took the basin with water up North, few meters away from the equator. The match stick started moving clockwise. He brought it down South, few meters away from equator. The match stick moved anti-clockwise. When he brought the basin back to the equator, the match stick just floated. I wanted to check it out myself. I took a new matchstick and tried the experiment. The results were similar.

I later googled to check the truth in the experiment. I couldn’t get a conclusive answer. I would still consider it educative, as I wasn’t aware of Coriolis effect and read more about it.

As we drove on through high altitude areas, I saw several pine forests. I love pine trees and exclaimed, “wow, you have pine trees in Kenya!” For a moment, I was ashamed of my ignorance about the country I was visiting (I was reminded of my interaction with an American several years back, a co-passenger in a Lufthansa flight. He asked me, “Oh, you are from India, do you get elephants to travel by?” For a moment, I thought he was joking, then I realised he was serious.)

Twenty five percent of Lake Nakuru National Park is is covered with a shallow alkaline lake. The water levels of the lake are rising, I saw the park gate of yesteryears completely submerged in water. A new gate has been opened. I was told that the alkalinity of the water is reducing. This is impacting the growth of the type of moss that flamingos feed on. Unable to find adequate moss, the number of flamingos visiting Lake Nakuru is reducing every year, they are finding alternate abodes. Is this also a result of climate change?

Challenges of the lake and flamingos aside, I found the forest quite different from Samburu, yet stunningly beautiful. It has a varied landscape that included areas of marsh and grasslands alternating with rocky cliffs and outcrops, stretches of acacia woodland and rocky hillsides covered with a Euphorbia forest. 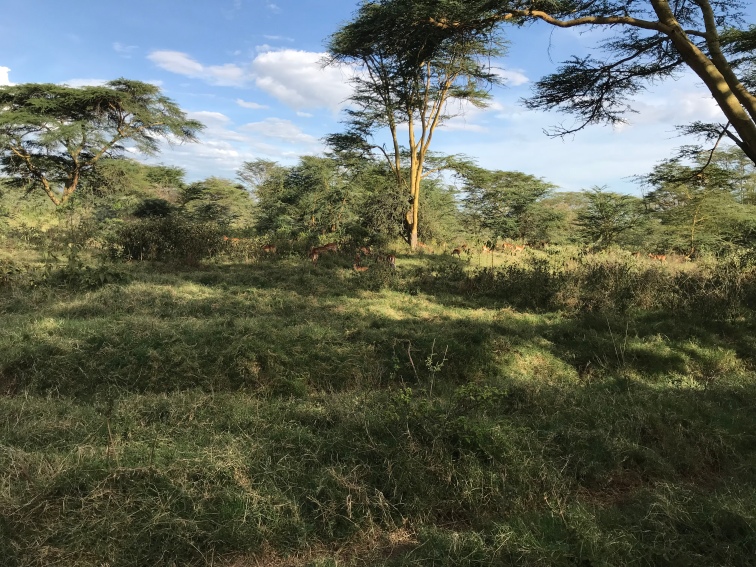 I drove on to my tented camp, The Cliff, aptly named as it is perched on the top of a cliff right above the vast Lake. It’s a luxury camp with all comforts of modern world combined with beauty of nature. To top it, only 3 tents (out of 10) were occupied, so I was pampered like a queen. 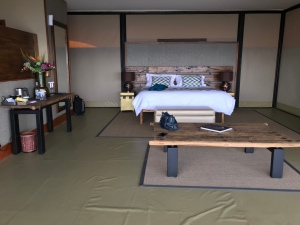 After lunch, I went out for my evening Safari. I saw loads of baboons carrying out several chores as a family – grooming (each other), playing, eating, taking care of their babies. One baboon was very close to my jeep, barely 2 feet away. When I looked at it, it intensely stared back at me. The eyes, I must say, are a bit scary. There is bright red dot in the middle of the pupil. I quickly averted my gaze. 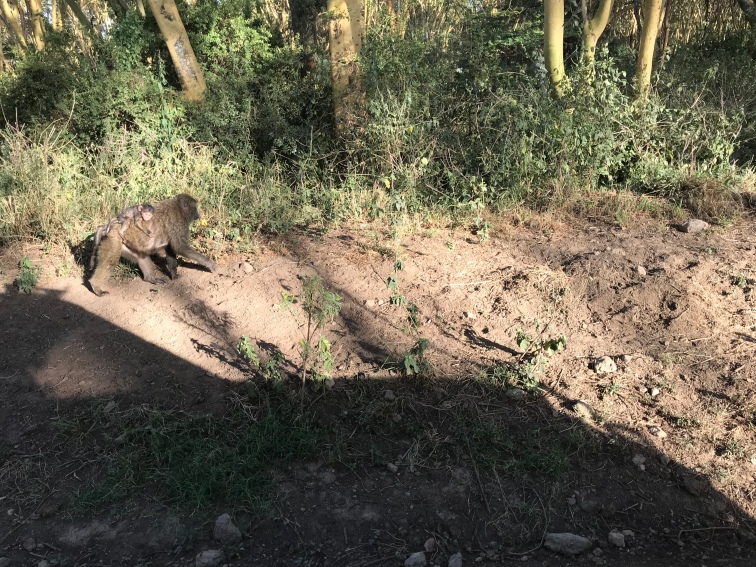 We moved on to a marsh lands to catch flamingos and pelicans. While I saw lots of pelicans, there weren’t too many flamingos.

After about an hour, I decided to head back to The Cliff and enjoy the luxuries of the tent. There was a small bottle of Moët (complimentary) in the mini-bar. The chef offered to send some crackers, cheese and grapes. What more can one ask for? I lounged in the comfortable deck chair, sipped the champagne soaking in the sights of the vast blue lake with hillocks beyond it. (Is this how heaven looks and feels like? I hope so.)

I rounded off the day with Kenyan veggie dinner, specially prepared for me.

I woke up the next morning to see a beautiful sunrise, the sunrays adding golden hues to the blue lake (all this as I lied down in my king size bed, sipping a hot cup of coffee). Honestly, Lake Nakuru is not to be missed if you ever visit Kenya. And stay in The Cliff is a must, it’s expensive, but what’s life without some luxury thrown in!!

After breakfast, I started for a full day game drive with a nicely packed picnic basket. Within few minutes of starting, we crossed a jeep with couple of ladies. They were super excited, I immediately understood that they have seen a predator (after visiting 10s of jungles, I take pride in my ability to assess whether folks in other jeeps have seen a predator or not – simply based on their facial expressions. People who have seen a tiger or a lion or the like are usually animated, their is a glow in their eyes. Whereas, those who are yet to catch one, specially after 2-3 rounds, have a dejected look). As our jeep passed theirs, one of the ladies told me excitedly, “lions lions, go quickly before they get into bushes.”

Lawrence didn’t waste another minute, he accelerated the jeep through the narrow jungle road, while I held on tight to my seat. In just about 15 minutes, we saw a lion and lioness behind the bushes. They were sleeping, then got up, came right up to our jeep and decided to go back for a nap again. It was a thrilling experience to see Mr. and Mrs. Lion first talk amicably, quite lovey lovey; suddenly the mood changed and they started to argue about something. (Is such inconsistent mood and behavior common in couples across species, humans included?)

We decided to leave the lion couple to themselves and moved on. After driving just about 15 minutes, we saw a lioness walking towards us, from other side of the road. Wow! Lady Luck indeed was smiling on me. All we had to do was stop our jeep and wait for her to walk towards us. She passed from my side of the jeep, she was so close, I could have touched her.

From there, we moved towards the side of the lake where we could see flamingos. I got down, escorted by a forest guard, I walked right up to the lake covered with flamingos. It was so beautiful, this part of the lake had turned pink – the flamingo color!

After spending lot of time with the flamingos, we headed for picnic lunch. There is a designated spot in the forest for lunch. There were several other jeeps parked, the tourists devouring lunch packed from their hotels.

Our rhino hunt began post lunch. I saw waterbuck, zebras and giraffes (there are no elephants in Nakuru). The patterns on the body of giraffe and zebra are quite different in this forest, as compared to those in Samburu – they are thick and bold.

We finally reached a spot where a rhino family was resting. We had to patiently wait for a good 45 minutes before one rhino decided to get up and take a walk. The rest continued to sleep.

After seeing the rhino, I decided to call it day. Next day was going to be a long day; visit lake Naivasha, then travel to Nairobi to catch a flight to Masaimara. I came back to The Cliff and enjoyed rest of the afternoon catching up with my family and friends on WhatsApp (I truly enjoyed the benefits of technology in this visit, I was alone but never alone – always connected with family, friends and rest of the world).

More about next stop, Masai Mara, in next part.. To be continued in Part 4