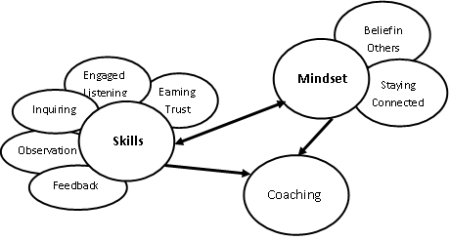 Coaching is a word that is often used in the corporate world: executive coaching, on-the-job coaching, off-the-job coaching, leaders as coaches…. the list goes on. Despite all this fanfare, if you ask an average employee about his or her coaching experience — how often he has been coached or benefited from coaching — the answer is usually not encouraging.

What is the reason for this dichotomy? Why do organizations and leaders fail to do well in this area despite valuing it so much? This brings us to the fundamental question: what really is the essence of coaching?

Think of the time when you learnt to walk, did your mother instruct you on how to walk? If it is difficult for you to go so far in your memory lane, think of a baby around 10-12 months old in your family and answer the question.

This example strongly links to coaching in corporate world. The corporate world needs to leverage this inherent desire of human beings to learn and excel in the work that they are doing. And do this without spoon-feeding and instructing.

Despite the organization need and opportunity, very few corporate leaders become good coaches. Several leaders embark on the coaching process without fulfilling the basic requirements of:

Without these foundational aspects, coaching becomes a mere lip service. If these are taken care of, a leader can become a good coach and create a coaching culture. These essentials are depicted in diagram above.

Mindset: is the attitude and orientation that we bring towards coaching.

Belief in Others – the cornerstone of coaching: ‘Belief in others, their ability and potential to achieve’ is absolutely crucial in coaching. In fact, this belief either helps or stops a leader from becoming a good coach.

This aspect of coaching is well captured in the concept of Pygmalion effect – the power of expectations. When we have positive expectation of an individual, we provide support and create a positive environment, at times even unconsciously, which facilitates the success of the individual. I am sure you will be able to recall someone in your life — a boss, father, mother, a teacher or a friend — someone who believed in your potential which in turn helped you achieve something that you thought was impossible.

Unfortunately the principle holds true for negative expectations as well! You may recall a few people who had limiting beliefs. These are the beliefs that set boundaries to our thinking and prevent us from seeing possibilities, like:

The foundation of good coaching is to break your limiting beliefs, draw out possibilities and stay connected to that possibility.

At times, you may face a dilemma about someone who you believe just does not have what it takes to be successful. It may seem impossible to develop positive expectation! In such situation, write the question “Am I sure” on a piece of paper and while writing down things in mind, also write the following:-

This deeper self-reflection may help in changing the belief. Before beginning a coaching session, remember to ask:

Who did you approach when you face a problem and need help? It’s always someone with whom you can relate to, someone you believe would be concerned for you and stay connected with you. Staying connected is a part of the solid foundation of coaching. You can stay connected by:

On the other contrary if your boss says, “that’s a great idea, and…….” You feel valued and included. That’s the power of AND.

Skills: Once the right mindset is created, the following five skills facilitate the actual coaching.

Think of all the good personal and professional relationships that you have built over years. What is the one characteristic that is common to both? It will invariably be trust, the basis for any relationship.

A leadership role may give you the power and authority to coach. But the effectiveness of coaching is based on TRUST. No position can command it, it has to be earned. And it is earned over a period of time, by walking the talk. Which in essence means demonstrating behaviors that make you credible. Keeping commitments play a big role. I remember one senior leader who lived this every minute. One day he offered to drive me to another office I had a meeting. He mentioned that he would call me just before leaving; and I could join him in the parking area. It so happened that he was in a hurry and left the office without calling me. After driving for 15-20 minutes, he realized the slip.  He called me, apologized and drove all the way back to pick me up. It went a long in establishing that this is the leader keeps his commitment, however big or small!

Another significant way to earn trust is by ‘respecting others’. You demonstrate respect for a person by believing that each person is unique, accepting the person for what he or she is, listening to his / her perspective with an open mind.

Have you ever tried listening to someone for five minutes without interrupting him or her (through either your words, or thoughts or actions). How easy or difficult was it? God has given us two ears and one mouth so that we listen more and talk less. But, this rarely is the case!

Most of us find it extremely difficult to listen to someone with full attention. Another reason behind this problem is that most people speak at a rate of 120 to 150 words per minute. And our brains can process 400 to 800 words per minute. As speed of comprehension is higher than that of speech, our minds begin to wander. And we either interrupt or our train of thoughts go into another direction.

Engaged listening is essential for coaching. It involves listening to the other person with an open mind. It is not about you… the focus is on the other person and what he or she has to say. It involves paying attention to not only the words, but the body language and the facial expressions. And avoiding making judgment and drawing conclusions.

There was this manager that I once worked with. On a lighter note, our team used to call him a solution generator. Whenever anyone of us went to him with a concern or problem, he would barely hear us. He would offer his solutions in 2 minutes. He was proud of his achievements and believed that he has solutions to all problems. And to top it all, he believed that he was a great coach as he was offering solutions. Such an approach to listening and coaching can be dangerous. A time came when most of the team avoided going to him. His solutions were not appropriate as he had offered them based on his judgment of the problem and not based on the real understanding of the problem.

Go back to your school or college days when you had to solve problems in mathematics, or algebra or the like. Which problems were easy to solve during the exams and you never forgot? The ones you solved by yourself or the ones that were solved by others — be it teachers or seniors or friends. Invariably the latter were more difficult to remember. This applies to coaching, lets connect this with the ‘solution generating’ manager. He was offering solutions without listening to the problem completely. Will it make a difference if he gives the solutions after listening to the problem completely? Probably not… The answer lies in the fact that when the solution is offered by the manager, it is his baby. When an individual finds his or her solution, it is the individual’s baby.

Through effective inquiring, you can understand the employee’s perspective, helps him or her generate different possibilities and options, and create an action plan towards closing the gap. It increases the commitment and helps the employee become self-reliant.

Imagine a scene where you see young girl in a classroom. She is sitting with her book in front of her, a pencil in one hand looking out of the window. If asked what she is doing, different people may give different answers – one may say she is day dreaming, another may say something interesting outside has caught her attention. Someone else may say that she is bored in the class, hence looking for interesting stuff outside!

Note that everyone is seeing the same fact, but are drawing different meanings. Who is correct? Probably none! To get the correct answer, we have to ask the girl. Why does this happen?

Indian writer and philosopher J. Krishnamurti notes that we all have past experiences, prejudices and fears that shape our opinions about what we see in front of us.  Thus, we are not really seeing but merely coming to conclusions and making judgments.  We see facts and based on the facts, we tell stories to our self. These stories after a brief period of time become reality for us. At best, these conclusions and judgments can lead to misunderstanding, or confusion about another person’s intentions.  Or they can lead to simply making generalizations about that person.  At worst, they can lead to dismissing or disregarding the person – rocking the very foundation of coaching: ‘belief in others’.

Practicing objective observation (without evaluation or judgment) is critical skill in coaching. You have to train yourself to stay with the facts observed and consciously avoid the stories.

Observation usually is the prelude to feedback and is almost always the first step towards active coaching. It means replaying behaviors demonstrated by the individual and highlighting their impact. It also includes a discussion of what the individual might do (even) better next time. The aim of feedback in coaching is to support, encourage or improve performance.

Though most leaders know the importance of feedback, giving feedback is unfortunately not a very common practice. The common concern of most employees is that they do not get enough feedback (neither appreciative nor constructive). At times they get it only during performance appraisal when it is too late to do anything.

Having developed the right mindset for coaching, a leader can embark on the actual coaching process. By earning trust, practicing engaged listening, inquiring and objective observation, any leader can look forward to a smooth and successful journey on this well-known, but rarely traversed road!

At the outset, I would like to thank you for stopping by my Blog. I believe that there is nothing right or wrong in this world. What’s right in this moment and context may be wrong in another moment and context. This belief has inspired me to name my blog ‘Perspectives’. Perspectives is a platform for me to share my experiences, thoughts and perspectives on various subjects. You may have a different point of view. I look forward to hearing them, these are the triggers for rich and deep conversations. On personal front, I live in Mumbai, India. I love to read; Somerset Maugham and Nevil Shute are my favorite authors. My favorite books are The Razor’s Edge, Mrs. Craddock, Chequer Board and Gone with the Wind. I am thankful to my father who inculcated the habit of reading in me early on. I am also passionate about traveling, I have been to most parts of India and to several countries across the globe. On professional front, I work in Human Resources function. Over two and half decades, I have worked across multiple industries and cultures. I focus on Leadership Development, Talent Management, Visioning and Culture, Large-scale change, Employee Listening & Engagement, Employee Well-being, Inclusive work culture, HR effectiveness, Behavior and Mind-set shifts through sustained interventions I currently lead Organization Effectiveness Function for Aditya Birla Group, a $44.3 billion conglomerate with 120000 employees across 35 countries. I sincerely hope that you will enjoy reading my blog. I look forward to your thoughts and suggestions. Thank you! View all posts by Padma Rajeswari Nandi