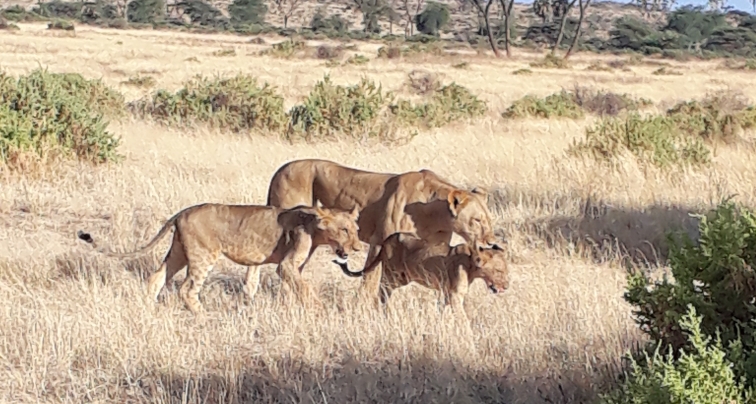 I first heard about Masai Mara more than a decade back from a wild life enthusiast. Since then, I have been dreaming of going to the African jungles. But, I couldn’t convince anyone – neither my family nor friends – for traveling to Africa. Since I wasn’t keen to go with Travel Groups, it kept getting pushed.

In August 2018, I decided to travel to my dream destination alone! I have travelled alone extensively for work, but had never been on a solo holiday trip. Hence, it took me a while to take the plunge!

Thank God I did! It turned out to be one of my best vacations ever!

After making all reservations in 3 forests in Kenya and taking yellow fever vaccination in Sir JJ Hospital, Mumbai (almost 2 months ahead of travel), I got immersed in day-to-day work. I sort of forgot about my decision.

Two weeks before the vacation, I started to have nagging doubts: What if I get bored all by myself? Will it be safe? What if I catch a deadly virus? What if the small aircraft crashes? There were countless what ifs?

But, I had made all advance payments (it was a hefty amount), and there was no turning back. I could barely sleep the night before travel, I was so overcome with doubts. Thus, with doles of conflicting emotions, excitement and anxiety, I started my journey to Nairobi in the wee hours of 10 November, 2018.

My travel to Nairobi was uneventful. As the Emirates plane touched down the soil of Kenya, all my anxiety had vanished. I was excited like a child, waiting to explore the magical land of Simba – The Lion King.

Nairobi has a small airport, for once I didn’t feel ashamed of airports in India (every International travel, irrespective of the country, makes me realize the inadequacy of infra in India). I quickly cleared immigration, customs and stepped out. A cash machine was conveniently located at the exit, making it easy for international travellers to withdraw money. There were couple of Telecom companies (including Airtel) selling SIM cards. Wish I knew this before, I had carried Matrix SIM from India, which didn’t work through my trip. So much for advance planning!!

It was a bright, pleasant day; Kevin, the representative from tour company picked me up from the airport. As we drove down to my hotel, Nairobi gave me the feel of a small town in India – the roads, parks (called public gardens), balloon sellers, buildings and street vendors (as well as beggars). This India-like feel was capped by a crossing that boldly spelt out – Gandhi Avenue. I warmed up and started feeling at home in this unknown country and city.

At one of the traffic signals, I saw few trees covered with giant birds, Marabou Storks. The traffic light turned green before I could take a picture, but I was surprised to see such huge birds in the middle of a city (it’s hard to see any bird other than crows and pigeons in India). The sights and sounds of Nairobi kept me engrossed through the 45 minutes’ drive to my hotel, Villa Rosa Kempenski.

I stepped into the beautiful hotel; I was told that President Obama had stayed here during his visit. The check-in was smooth, the staff were warm and friendly. Friendly and warm – these are the only two adjectives I have for Kenyans – I experienced it throughout my travel.

I had a room overlooking a serene forest-like area. I was so fascinated by the view; only later did I realize that it was nothing compared to what I was to see in coming days.

When I opened the in-room dining menu, it had one entire page dedicated to Indian food – both vegetarian and non-vegetarian. After an early dinner of vegetarian Chinese fried rice (it came with eggs, so I had to get it changed), I retired for the night and slept like a baby.

I was traveling in a 12 seater safari vehicle. When I asked Lawrence why he had brought such a huge vehicle for one person, he answered, “it’s the best and your paid for it”. I then realized why my trip had costed a bomb!! Having paid for it, I decided to enjoy the luxury of occupying space meant for 12 people (and stop worrying about wasted fuel).

The road to Samburu was in excellent condition and offered breath-taking views. We crossed rows and rows of pineapple orchards. The undulating road took us through misty blue-green hills. This is where it started to drizzle. We crossed a place from where we could have caught a glimpse of Mount Kenya, but for the clouds and mist. We took a short break at a curio store that also had a restroom. I stepped into ladies with trepidation (despite assurance from Lawrence); to my surprise, it was spotlessly clean. Indeed, Indians have a lot to learn! I picked up few curios, they were so beautiful, I couldn’t hold myself back. The store owner was happy to meet an Indian and started chatting. Apparently his relative had visited India for treatment, has fully recovered – hence the love for India.

We kept driving through miles of fertile fields, with beautiful hillocks rolling behind. I probably dozed off for a bit, I woke up with a start when Lawrence announced that we are about to enter the Samburu National Reserve. My first question to him was, will I see animals? He just smiled, which said, just wait and watch. Within few minutes of entering the park, I saw a lone elephant, then 3 more elephants. Then a herd of zebras, more elephants, giraffe, a turtle, gerenuk… all this even before I officially started my game drive. What more can a wild life enthusiast ask

I reached Larsen’s Camp around 1:30 pm. The tents were quite unassuming, actually seemed a bit run down from outside. My impression changed the moment I stepped into the tent; it was spacious and beautifully designed. My tent was on the banks of River Ewaso Nyiro; considered the lifeline of Samburu. The brown waters flowed gently, peppered with large patches of greenery beyond.

The only menace in Larsen’s camp was monkeys; which were there everywhere. I was strictly warned not to carry any food, or keep any food in the tent. Also, I had to lock my tent – three-way zip – at all times, even when I am inside. I believe the monkeys over time have learnt to open the zip all three ways, unless properly locked. David, the monkey catcher (a local from Samburu tribe) played an important role. The sight of David in red clothes, with a slingshot on his shoulder, was enough to get the monkeys on a scurry. I never saw him use it, guess the monkeys carried lessons from the past.

I took a short nap and started for my afternoon game drive. Landscape of any jungle fascinates me as much as the wildlife. Samburu has a beautiful landscape of plain land, with patches of scrubby, green-brown bushy trees and plants. Few hillocks at a distance gave a beautiful contrast to the shrubs and plains. River Ewaso Nyiro flows through the jungle, with several branched palms trees on its banks. (Interestingly, I had seen branched palms trees in Diu, we were told by the guide then that they were brought from Africa… here I was looking at the original version.)

Samburu has plenty of wildlife, I saw graceful giraffes graze on the trees, with sun rays making their skin golden brown. Zebras were there practically everywhere. The Grevy Zebras here are beautiful with their narrow stripes. I was asked to catch the pattern on giraffe and zebra in Samburu and later compare them in other forests. Indeed, they are very different. You will also notice it in pictures.

I saw Dik Dik (smallest antelope, fast and timid, difficult to catch on camera), gazelle, impala, warthog. I couldn’t catch a lion, but I saw a large elephant family have their evening meal for 15-20 minutes. It was fascinating to watch them pulling twigs off trees, munching on leave, looking around, moving from tree to tree (will share the video in next post). 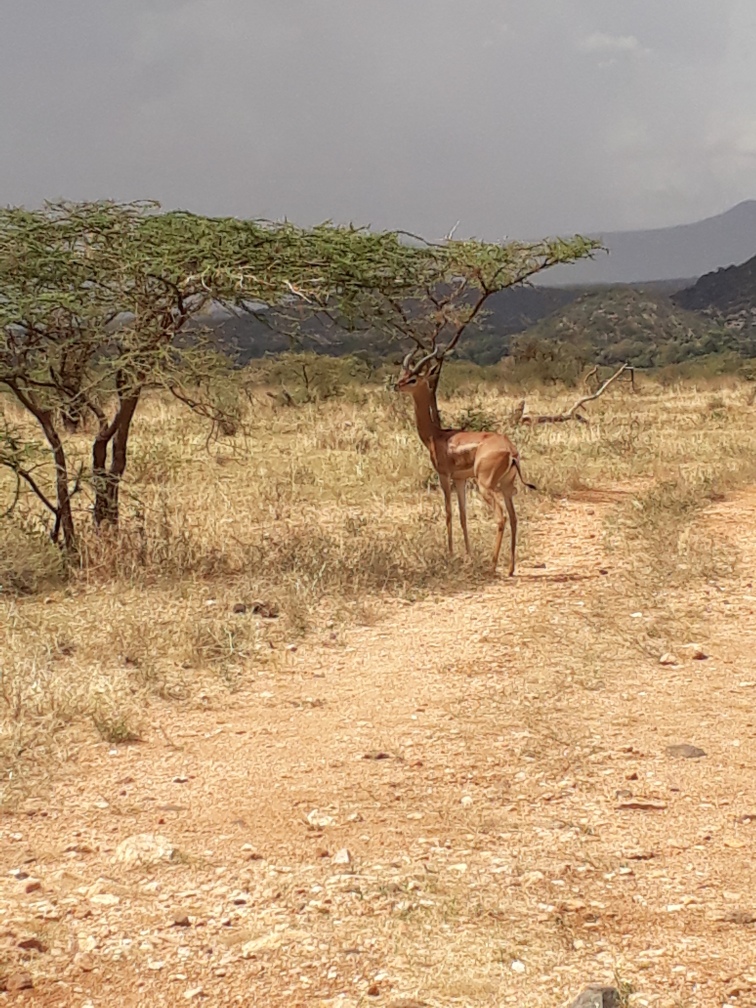 By the time I returned to safety to Larsen’s camp (surrounded by an electric fence), the sun had begun to set. It quickly became dark; the monkeys had all gone to sleep. But, their space was quickly taken by the invisible crickets. The quiet of the evening was only broken by their incessant chirping and other sounds (beyond my recognition). I looked out of the tent, only to see (or not see) deep darkness. The darkness combined with sounds of jungle were enough to send shivers down my spine. I turned on all the lights in my tents (there were many). I suddenly recollected my briefing discussion during check-in, “The camp runs on generator, so we turn it off for few hours every night, typically between 12 to 5 am”. I shuddered at the thought of complete darkness for 5 hours. I prayed for sound sleep that night.

Larsen’s camp probably understands the fears of travellers. They provide an escort at night, to accompany for dinner. I sealed the day with lovely dinner. Despite my fears, I slept well. I did wake up in the night when it was pitch dark, but I managed well with a torch light.

Hope you enjoyed reading my experience thus far.. will continue in next post. – Part 2

One thought on “Memoirs from African Savannah – Part 1”