My son went to a NCC camp (National Cadet Corps, a wing of armed forces) couple of months back. The camp was for 15 days. Imagine what 15 days – with friends and neither studies nor school – would mean to a 14 year old. He was very excited; so much so that he could not catch a wink of sleep the night before his camp.

He pulled through the first day in camp reasonably well. Over phone, he sounded excited as he narrated his adventure of clearing stones and pebbles before making bed on bare ground. Happy that he was adjusting well, I called him the next day. To my horror, he was ready to pack his bags and come back home. With voice loaded with emotion, he explained the miseries of dirty toilet, bad food, crowded tent, tough CO (Commanding Officer), long queues for everything etc. etc. He insisted on being picked up the same day.

My husband and I had long counselling sessions with him over phone. We met him during visiting hours the next day and took along his favorite food. By third day, he was willing to stay for 2 more days to complete rifle shooting training, the star attraction of the camp. On the 5 day, we were pleasantly surprised to hear his decision: I will complete the course.

The conditions did not change, the problems were the same. It was his approach and attitude to the problems that changed. And he had started enjoying the positive aspects of the camp. Today, he is proud of his ability to rough it out. And the fact that he has been able to successfully complete the camp, unlike some of his other friends who gave up in between. As a mother, I am happy that he has been able to adapt to a completely alien and difficult living conditions.

He started the camp with high excitement. The realities of the camp dampened his excitement. Within a day, it had hit rock bottom, when he was ready to quit. Gradually, he re-kindled his enthusiasm; partly through our counseling, but mostly through his own attitude and ability to adjust. He went through the U curve of adaptation. Though he navigated back to top end of U, some of his friends never moved up from the rock bottom. They are the ones who quit the camp. 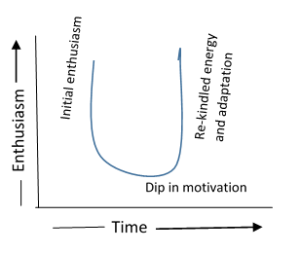 The U curve of adaptation applies to professional as well as personal spheres of life. I remember my movement to a new organization some years back. I had worked with a small tight-knit company for many years before joining this organization. The new job had lots of positives: better salary, better office, better brand, senior role. On the face of it, it should have been an easy move. There should have been no U curve of adaptation. But, there it was all the same!

Just like my son, I joined this organization on a high. I don’t remember walking into the large beautiful campus, I only remember gliding in; my spirits were so high. After the initial weeks of euphoria, reality stuck.
I was used to quick decision making and fast execution. My new organization was large with multiple stakeholders, too process-centric and bureaucratic. A task which I would have completed in less than a month in previous organization took more than 3 months now, that too after multiple rounds of meetings and ‘socialization of the idea’. I started getting impatient with the pace of work. Also, I moved from a situation where I knew everyone and my capability was well-acknowledged. Here I knew no one, I had to build relationships from scratch (which is not easy for an introvert like me). And I had to prove my capability all over again. Suddenly from ‘somebody’, I felt as if I had become a ‘nobody’. I had hit the rock bottom of the U curve in 4-5 months.

I realized it one Monday morning after a long weekend when I just didn’t feel like to going to work. I wanted to call in sick. However, I dragged myself to office and had a catharsis with my boss. Fortunately for me, he was an understanding man. And actually helped me move up the U curve. I eventually began enjoying my work there.
Today, when I reflect the reasons for my slide down the U curve, few things stand out:

1. Denial – At a cognitive level, I knew that things would be different in a new organization. But when the differences actually hit me, I found it hard to deal with them. It goes on to prove that ‘awareness and knowledge’ is one thing; but ‘experiencing it’ is completely different. To top it, I denied for some time that I was struggling with the change. My path to rejuvenation began only after I moved out of denial.

2. Lack of observation and learning – I was not keenly observing my coworkers, their mannerisms, behaviors, likes and dislikes. I was not picking those subtle cues which would have helped me settle well. I was working with assumptions, based on my previous experience, which unfortunately did not hold true anymore. I was simply not investing enough time and effort to learn the new way of doing things.

3. Impatience – I was impatient with myself. I wanted to adapt myself in new settings fast. And quickly move towards becoming ‘somebody’. Once I decided to give myself some time to settle with a clear action plan to move in right direction, I started feeling better. Not only that, I started doing better.

As I see successful people struggle and stumble in new settings, I only wish they would try patience and learning orientation to navigate the U curve of adaptation.

4 thoughts on “Negotiate the U curve of adaptation”